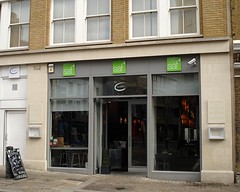 Saf was a vegan restaurant in Shoreditch; it has now closed. According to their website as of March 2012, they "decided to spread [their] wings and pursue new goals".

A vegan restaurant in Shoreditch which is based around raw food, although not limited to it (they note any food which has been heated higher than 48 degrees). The website calls its cuisine "botanical" and "eco-friendly".

The space itself stretches back from Curtain Road and is quite long and thin, opening out a bit near the back. The kitchen takes up a fairly small space halfway down the room. Near the door is a bar and there are some couches in an alcove for waiting guests to sit and have a drink (they have quite a large cocktail list), as well as seats at the bar itself.

Service is efficient and friendly, and all our food came fairly quickly (except dessert for which we waited significantly longer, but they did apologise as they were quite busy by this point). Food is well-presented, often on unusual plateware (one was on a square slate), with portions quite small but filling nonetheless.

Our starters (each around £6) were some very tasty vegetable maki sushi rolls, though the wasabi which accompanied them was not particularly hot, as well as samosas which had a dried skin resembling the cooked version, though obviously less oily.

For the mains (around £10-£11), the pizzette was an attractively stacked concoction of "'roasted' onion flax crust", with shimeji mushrooms, pesto and some basil salad. Although small, it had an intense flavour. Ewan had some Chinese pancakes filled with vegetables which were very tasty — again, the 'pancake' wasn't cooked but it was a convincing substitute, very slightly warmed photo.

We then had a cheese board (£16 for sharing), which had a selection of soft 'cheeses'. The texture was somewhat more like a pate, really, but they were very tasty nonetheless, and served with dried flaxseed crackers.

From the dessert menu (around £5 each), the marble torte and chocolate ganache tart were each lovely, slightly creamy and quite intensely flavoured again.

Ewan's verdict: I'd happily return. The food is superbly made, filling without being stodgy as you'd expect from the method of making it.