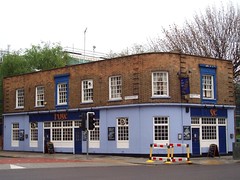 Ruse was a bar/pub just down the road from Borough Station. In July 2015 it was announced that it would close for good the next month, due to sale of the building lease. The last night was 24 August 2015.

Bar/pub just down the road from Borough Station.

Venue Hire: Holds up to about 150 people (more at a squeeze), can do food, no hire charge. Sky and Setanta shown on two plasma screens via two Sky boxes. [Juliette]? was told in 2007 that the minimum spend for exclusive hire on a Saturday night would be around £1000-1500 (can't remember exactly), and that the music would be restricted to the songs on their music system; an anonymous commenter in July 2008 told us that the average minumum spend for exclusive hire would be around £750 depending on the date, and that the music system currently has about two thousand songs.