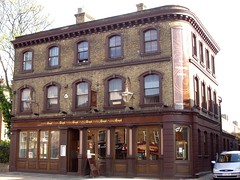 The Ruby Grand was a pub on King Street in Hammersmith, part of a small chain. It has now closed. As of October 2011 the premises are occupied by another pub called The Hampshire Hog.

The information below is retained for people who want to know what it was like as the Ruby Grand.

Upmarket-aspiring pub on King Street in Hammersmith, part of a small chain.

It's divided into a few different areas, with a "morning room" tucked away to the side; a larger drinking space with smart brown leather banquettes, mini armchairs, and a hardwood floor; a dining area further back; and a sunny beer garden with picnic tables, accessed via the dining area. It looks quite smart and nice, though unfortunately on Kake's June 2009 visit the ladies' was in a bit of a state, contrasting strongly with the rest of the pub.

Kake visited on a Wednesday afternoon in June 2009. The only other customers when I arrived were a group of students who seemed to have just finished their A-levels, though a few others arrived while I was there. Music was playing (reggae and some other stuff). A pint of lime and soda was £2, and came with a couple of lime wedges squeezed in. They had Deuchars IPA available on handpump; two other handpumps had turned-around clips for London Pride and Courage Directors.

Accessibility: One step up to get in. Step-free once you're inside, and there's a dedicated accessible toilet. Small ridge to get into the beer garden.