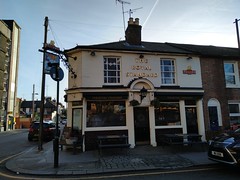 It's small but cosy, traditional and friendly, and hasn't much changed over the years since bob first visited in 2004. The front section has a "public bar" feel, with room for standing as well as a few stools. Further back is more seating, with this area wrapping right the way around the bar to end in a small area with a couple of individual church-pew seats, each with a concealed misericord underneath.

There are a couple of picnic benches out the front, but there's also a proper beer garden. Although the latter is across the road from the pub, situated under the Croydon flyover, it's actually much nicer than these bare facts might suggest, and quite a pleasant place to sit out in summer; the road outside the pub is a quiet one, and the flyover traffic is high enough up that it doesn't really intrude.

The pub has a selection of board games (including Boggle), and a shelf of books which you can read in the pub or take away with you if you make a charity donation. There's also a fruit machine in the back part, and a flatscreen and dartboard in the front part. There hasn't been any music on any of our visits. According to a sign seen in January 2014, there's a pub quiz every Tuesday from 8:30pm.

According to a sign in the pub in January 2014, food is served noon-10pm Mon-Sat photo of menu. They do some very good pork pies (£2.50) photo. In October 2013, bob's party had the chilli con carne with rice and tortillas (£4.75) photo, the fishfinger doorstep sandwich (£3) photo, and a plate of chips photo. In January 2014, the whitebait (£2.50) photo was decently fried and not greasy; bob missed the usual crunchy coating but Kake liked how the lack of coating let the flavour of the fish come through.

Kake's verdict: One of the best pubs in the area.

Accessibility: Step at front entrance, smaller step (about an inch) at side entrance. Step-free to bar, toilets, and about half of the seating once you're in. One of the stalls in the ladies' has a door that opens outwards. The pub is quite small and access can be a bit narrow.