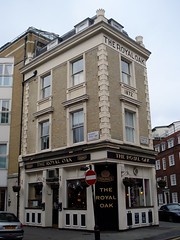 It had a change of management in January 2014; we haven't visited since, and so some of the details below may be out of date.

Situated on a sharp corner formed by Rutherford Street and Regency Street, the Royal Oak is a fairly small single-room pub. There's an open area at the front for standing, with bar stools, one high table, and a drinking shelf around the outside edge. The windows are fairly large, with clear glass. Pale wood floorboards are underfoot.

Bob and Adam visited on a Thursday evening in November 2007. Winter Warmer was on, and quite drinkable too even though we had a barrel change between the pints we bought. The pub was full.

Kake and bob visited again on a Sunday afternoon in December 2008. Winter Warmer was on again (£3.10/pint), as well as Young's Bitter. There were little plates of cheese and biscuits on the bar for people to nibble on. Most of the other customers were older people, and there was background music to match (Glenn Miller etc).

Accessibility: Step-free to get in, but the ladies' toilets are down a narrow, winding flight of stairs.