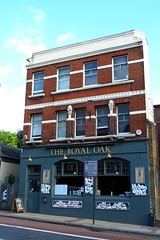 Pub in Wandsworth, which according to Fancyapint is now closed.

A pleasant little pub in Wandsworth, this has been done up in recent years but still feels like a proper traditional pub.

It's a small area which stretches around the bar, mostly wooden tables but with a couple of large comfy sofas. Newspapers are available for reading, and there's a stack of boardgames in the corner. On the Thursday evening we visited, the place was very empty.

There's only one ale on pump, which is Black Sheep Bitter (£3.10/pint), along with lagers such as Hoegaarden and Staropramen as well as the usual suspects.

A "beer garden" is advertised, but this is actually just five or so tables in the alley alongside the pub, though it's closed off from the street by a gate.