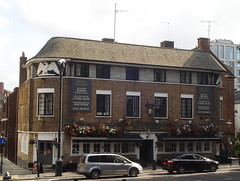 It's divided into two halves on either side of the bar, though there are no barriers between them. Seating on the right hand side is mainly at high tables, and a pull-down projection screen makes it clear that this area is for those who like to watch their sport in the pub. The left hand side has banquettes around the walls, augmented by freestanding chairs and tables. The rectangular bar area is open on three sides, though service is only available from two. Floors, chairs, tables, and bar are varnished dark wood, and the walls are painted in complementary browns and creams.

Kake visited on a Wednesday morning in September 2014. There were several people in at the opening time of 11am, including a party of travellers with suitcases who seemed to have been waiting outside for some time. Music was playing, not too loud. The projection screen was showing football, possibly with the sound on quietly but it was hard to tell over the music from where I was sitting. The flatscreens were showing BBC News.

According to signs on the tables, food is served until 11pm, presumably all day. The menu photo looked like a chain-wide one, though there was also a small insert of "specials".

Accessibility: A tiny step in at the front entrance, (more of a ridge, really). Toilets not checked.