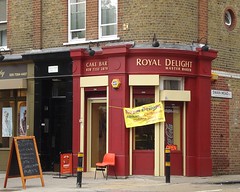 Royal Delight was a Caribbean/African bakery/cafe on Tower Bridge Road in Bermondsey. It has now closed. As of early 2015 the premises are in use as the Bermondsey Labour Campaign Centre.

Note: As of March 2014 there's a sign on the shutter photo stating that the premises have been temporarily closed due to "unforeseen situation" but that orders can still be placed by phone.

It mainly focuses on food to take away, but it does have one table which could seat two people.

bob visited in January 2011. The beef Jamaican patties (£1.30 each to take away) were very tasty, with a decent amount of chilli, and didn't seem to be mass-produced. They were microwaved to warm them up. I also had some doughnuts, which were fine; quite stodgy, but in a good way.