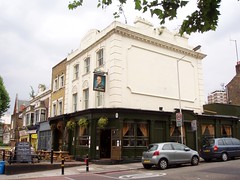 Pub at the Deptford end of New Cross.

It was previously operated by Antic, but in late 2020, a notice appeared on the Royal Albert website stating that several pubs, including this one, had been taken out of the hands of Antic and transferred to the management of Portobello Brewing. In November 2021, Portobello announced that it had acquired the freehold. We haven't visited since the transfer, and so some or all of the details below might be out of date.

This was once the "Paradise Bar", the early-00s focus of the New Cross music scene and also known for some stabbings, which probably didn't help its longevity. Now it's been given back its original name, carefully refurbished, and done up with the familiar mismatching antique-style furniture, comfy leather sofas (and some less so, given their advanced state of decrepitude), and retro atmosphere of the Antic chain pubs. Although some of the tables push at the edges of sanity (a French-style dressing table in the front of the bar doesn't even have space to put your legs under it), the place is for the most part very cosy. There's a bar billiards table towards the front.

Bar staff are friendly, and there's regularly changing ales on the eight handpulls, four of which were installed to great fanfare in late 2011, marked by the Octo-Pump ale and cider festival. On our March 2008 visit, the staff were keen for us to try the St Austell Proper Job ale, which was indeed very nice and well-kept. When we visited again in September 2011, shortly after the additional handpumps were installed, five of the pumps were on, offering RCH East Street (£3.30/pint), Bakehouse Brewery Bakers Treat, Hogsback HBB, Kent Brewery Pale Ale, and Severn Cider.

The wine list is fairly extensive, with bottles priced at £14-19 as of March 2008. Draught taps dispense Amstel, Früli, Grolsch Weizen and Duvel Green, among others. There are also plenty of bottled beers, including Duvel, Chimay, Anchor Steam Beer and Brooklyn Lager.

The kitchen area is open at the back of the bar so you can see the chef cooking. As of September 2011, food is served 5pm-10pm Monday to Friday, noon-5pm and 6pm-10pm Saturday, and noon-5pm Sunday. While in the past they've done pizzas — see photo of menu in May 2009 — they now seem to have stopped, and also to have decreased the size of the menu, though the options remain interesting; see photo of menu in September 2011.

In September 2011, Kake's whitebait with tartare sauce (£5) photo were perhaps a little salty, but the fish were a decent size and fairly meaty, and competently fried to a crunchiness without overcooking. The portion was very generous too.

On a previous visit in May 2009, Ewan's vegetarian lasagne was excellent, served in a ceramic bowl on a solid wooden board, with a nicely crispy slice of garlic bread and a small fresh salad, an attractively-presented and tasty meal for only £7 photo. Sarah's R.A. burger was also a good size, if a little burnt, and with plenty of chips photo. The pizzas weren't great, being a little too doughy (they have no pizza oven), though had a pleasing home-cooked-ness to them photo. They have pasta dishes, such as the tagliatelle photo. Sausages and mash have also been pleasing, although on one occasion the kitchen was rather busy and took some time to deliver (although we were warned when ordering). In spring 2008, the hummous and pitta bread starter (£3) was nicely warmed, with some peppery hummous, very tasty, while Kat's steak & ale pie was adjudged to be very good, and Ewan's mix of market vegetables and fried plantain with 'very hot' chilli sauce was a good size (and the sauce was indeed rather hot) photo. The food standard is, in general, very reasonable.

As of June 2009 there's a pub quiz every Monday (£1 entry, 7:30pm start time). When Ewan et al. arrived half an hour before the start of this, the place had plenty of drinkers already, many out in the sunshine, and it filled up for the quiz which started fairly promptly. The quiz has 45 questions (sometimes with a picture-based round and with an additional drawing round, but no sports round) and is a good blend of easier and more challenging questions. The prize is the takings (on our visit this was about £50). There's also a jackpot round with ten questions to win a prize pot of money.

Ewan's verdict: Definitely a place worth returning to, a nice local for the area, with plenty to recommend it.

Accessibility: A huge step to get in. It's step-free to the bar, seating area, and ladies' toilets once you're in, though the cubicles in the ladies' are a bit of a squeeze to get into due to the width of the inward-opening doors. On our September 2011 visit the lighting was very low, mainly provided by candles on the tables.