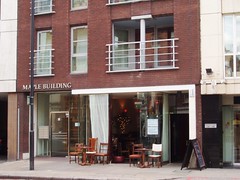 The Roxy was a cinema, of a sort, near Borough and London Bridge Tube Stations. It closed in June 2017 and the premises are due to become a KFC.

A cinema, of a sort, near Borough and London Bridge Tube Stations.

The Roxy has a bar area at the front and at the back a large room set up with tables of varying sizes. Much of the back wall has been made into a screen for a (digital) projector mounted in the middle of the room, with an array of couches just beneath it. The effect is like an oversize living room.

They show double- and triple-bills of films and videos on a regular basis. When screening films, a thick velvet curtain is drawn across the room to keep it separate from the bar area (where there is seating for people who are not watching the film). Generally, silence is respected and although there is noise from the bar area, the space retains a pleasant ambience. The staff will deliver food and drink orders to your table during the film.