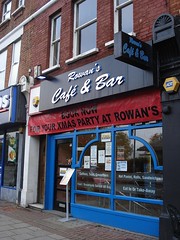 Rowan's was a cafe and bar in Chiswick, near Kew Bridge. It has now closed to the public; according to a member of staff in December 2017, it's only available for private hire.

Cafe and bar in Chiswick, near Kew Bridge. Breakfast is served all day, and although they do have a set breakfast (£4.45 for bacon, sausage, egg, mushrooms, baked beans or tomatoes, toast, and tea or coffee), they also encourage you to build your own from their individually-priced selections.

Bob visited on a Friday lunchtime in July 2008 to try out the build-your-own breakfast. I ended up paying £7.10 for my selection photo plus an extra £1 for tea.

They're licensed to serve alcohol, and food is served until 8pm weekdays, including sandwiches, "bar bites", and full meals. There's a courtyard out back.

Rowan's is also available as a party venue, and has apparently been illegally flypostering this fact all over West London for a couple of years now: October 2006, March 2007, June 2008.