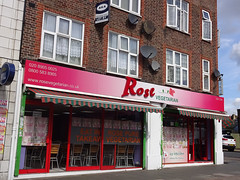 Decor is cafe-style, and it's split into two halves, able to seat around a hundred people in total. The floor is covered with cream-coloured tiles, and the walls are painted dark pink with lilac accents photo.

They also do Indian versions of Chinese food. Dishes on the menu are marked according to their suitability for different diets, e.g. wheat-free, dairy-free, Jain, etc. According to the menu as of July 2013, they do an all-you-can-eat buffet from noon to 3pm on weekdays. The menu also notes that no alcohol is allowed on the premises.

Kake has visited twice now, most recently in September 2016. On a Sunday lunchtime in July 2013 there were a fair few groups in having lunch, though plenty of spare tables. On a Thursday lunchtime in September 2016, I was the only customer when I arrived just after their opening time of noon, though several others arrived while I was there, and a couple were in and out for takeaways. Both times, a large jug of tap water was placed on the table as I sat down, without me having to ask for it.

In July 2013, uttappam with tomato and cabbage (£5) photo was OK; the tomato and cabbage were cooked just right, but the uttappam itself was overly hard on the underside. The accompanying coconut chutney was surprisingly mild in flavour; usually this is quite spicy, with plenty of green chilli. The other traditional accompaniment of sambar (a wet vegetable curry) was fine.

On the same visit, pani puri (£4) photo had very fragile shells; half of them already had holes in the bottom before I even picked them up, which is a significant defect given that this dish is eaten by pouring flavoured mint water (pani) into the puri shells before popping them in one's mouth. The pani itself was fine though, with a nice tang, and I liked the addition of chaat masala (sweet/sour/savoury powder) in the puri filling.

Kake tried the pani puri again in September 2016 (now £5) photo; the puri were fine this time, but the pani was nowhere near as good as previously; it basically just tasted of salt and chilli. A 10% service charge was auto-added to my bill.

Kake's verdict: I was somewhat disappointed with the quality of the food I ordered both times, and am unlikely to give it another chance.

Accessibility: There are a couple of entrances, all with steps; the step at one entrance is lower than kerb-height, but the doorway is a little narrow. Once you're in, it's step-free. The ladies' toilet doubles as an accessible toilet, with grab bars and a low sink (though the hand drier isn't low).