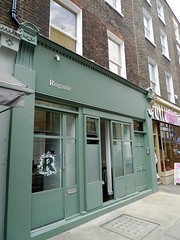 Roganic was a self-described two-year "pop-up" restaurant in Marylebone. It opened in June 2011 and closed in June 2013, with the final day of trading on 20 June. As of late 2013, the premises are occupied by Pieds Nus.

A self-described "pop-up" restaurant in Marylebone which opened in June 2011 under the executive control of chef Simon Rogan, this site is in fact on a two-year lease. In interviews before the opening, there was talk of extending the lease, but as of spring 2013 the restaurant's Twitter account confirms that it will only be at this site until 20 June.

It's a small space, with about 30-35 covers (including a number of tables in a separate room to the rear), and a few pillars breaking up the space. Doors along the front open to the street in nice weather, and a small door at the side leads to a front desk. Tables are dark wood with a sparse simplicity to the place settings photo. The presence of large rocks is initially mysterious, but after ordering, a staff member comes by with what appears to be freshly churned butter, to spread it on the rock for each diner photo. Bread comes shortly after in a wooden box, a selection of three breads (one of each per diner, though they happily bring more and leave them there during the meal) photo.

The menu choices are limited to two at lunchtime: a five-course (£40) and a ten-course (£80) tasting menu photo of lunch menu in June 2011. In the evening, it is just the latter which is available. The wine list comes in a separate folder but is fairly short with all wines also available by the glass (125ml), possibly due to only recently opening the site (they had been open only a few days when Ewan visited). However, an excellent Austrian roter veltliner is listed at £5.90 a glass; Kat has the New Zealand sauvignon blanc (£8.50/glass).

The food concept is to source from around the country (the provenance of ingredients is stressed), but not to focus on protein-heavy foods. The meal itself never feels particularly stodgy or overwhelming, with a number of fresh, beautifully-presented courses. The food starts with an amuse bouche photo, and moves swiftly on to the first course, mackerel on a bed of what I'm assuming is pea puree, with broccoli and orache, and surrounded by a moat of elderflower honey: it is, in effect, a tiny landscape, though it's also a delight to eat. It's followed by a vegetable course, with heritage potatoes on an onion paste and topped by onion ashes, with more intriguing accompaniments (lovage and wood sorrel) photo.

Another fish course is possibly even tastier than the first, a piece of roasted brill studded with chicken salt, with cockles and ruby chard photo. Finally, there's the Cumbrian hogget photo, with artichoke and (I believe) small morsels of sweetbreads, and it's excellent and wonderfully tender. A cheese course is offered at this point (which we turn down).

The listed dessert is a "sweet ciceley" photo, very refreshing and light, with perfect strawberries and a buttermilk custard. This is followed by a sweet berry-flavoured drink and a cube of marshmallow photo, and finally a tiny Victoria sponge with raspberry atop photo.

Ewan's verdict: An excellent meal in all respects. Service was also friendly and attentive. The overall effect was not overwhelming at all, really well-balanced: I didn't even get filled up by all the bread I ate. The cooking and use of native ingredients is interesting enough to justify a return visit.