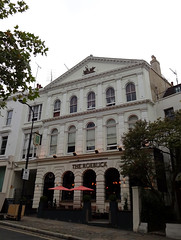 Pub opposite the Royal Free Hospital in Hampstead. It was taken over by Young's in 2008; see older version of this page for a description of it pre-takeover.

Entry is into a large yet rather gloomy space, with dark wood, dark green paint, and minimal lighting working against the high ceiling and large arched windows. Paintings of birds hang on the walls along with charcoal drawings of dead white male novelists and the obligatory photo of the Queen Mother pulling a pint. Pillars and room dividers break up the space, helping to move the overall impression from gloominess to intimacy.

Seating is a pleasing mix of curved banquettes, wingback chairs, and regular upright chairs, and tables range in size from two to eight. Further in is a smaller space with half-height booth seating, leading out to a large garden.

Kake visited on a Tuesday lunchtime in September 2018. There were quite a few people in when I arrived around 1:30pm, most of them in the garden. Music was playing, a bit generic, not too loud. The handpumps were clipped for Courage Directors, Purity Gold, Young's Bitter, and Young's Special. A pint of lime and soda was £2.10.

Around half of the tables were ready-laid with napkins, cutlery, and wine glasses, but the staff said it was fine for me to sit wherever I wanted even though I was just in for a drink. Service was friendly and helpful.

Accessibility: Steps at one entrance but step-free at the other. A small ridge at the garden threshold, about an inch or two. No steps to the accessible toilet.