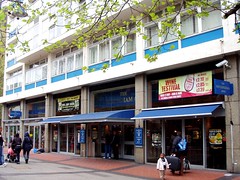 Wetherspoons pub at Elephant and Castle under Metro Central Heights, the Erno Goldfinger-designed building just to the north of the station(s).

It's a large space, but low-ceilinged and broken up with large round and rectangular pillars. Seating is a mix of high tables and normal tables. A raised seating area to one side is encircled by a tall upholstered banquette with some rather unfortunate-looking stains. Very little natural light is able to penetrate, but flashing fruit machines provide a somewhat distracting alternative.

secretlondon visited on a Thursday lunchtime in September 2008. A gourmet burger and drink was £6.19, though the size of Coke (14 oz) in the offer was less than the pints of beer. There was plenty of room at 1pm, and I was served within 20 minutes.

Kake visited on a Monday early evening in October 2016. It was quite full when I arrived around 4:30pm, and I had to look about for a free table. No music was playing, but there was plenty of background noise from conversations. Staff were fairly diligent about clearing and cleaning tables.

There were six real ales on — Afro Caribbean Brewing Co Hop Session (brewed in the UK for Wetherspoons by brewers from South Africa), Foglie D'Erba Hot Night At The Village (as the previous, but by brewers from Italy) Everards Pitch Black, Morland Old Crafty Hen, Sharp's Doom Bar, and Abbot Ale — and two real ciders: Marcle Hill and Old Rosie. A pint of lime and soda was 80p.

Free wireless is provided by The Cloud.

Accessibility: No steps to enter. Some of the seating is on a dais, but there's plenty of other seating on the level. There's a RADAR-locked accessible toilet on the level too; other toilets are down a flight of stairs with a sturdy handrail. Some of the tables are quite close together.