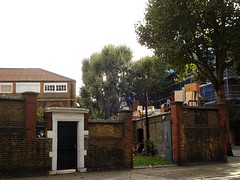 British restaurant focusing on seasonal food, located in the A Foundation contemporary art space in Shoreditch.

It's run by Arnold & Henderson, a catering firm set up by two chefs who'd previously worked with Fergus Henderson of St John. It was previously BYOB, but they now have an alcohol licence so BYOB is no longer permitted.

The premises used to be a school, and entrance is via a door marked "BOYS" leading directly off Arnold Circus (you may have to press the buzzer to get in). Inside, what presumably used to be the boys' playground is now partially grassed over, and a small path leads further in to the restaurant itself, housed in a small space that apparently used to be a bike shed. There's seating for 40 people inside, at communal white formica-topped tables laid with cutlery and paper napkins, and about the same number outside, at small round three-person tables which can be pushed together for larger groups if necessary. The front wall of the interior seating area is entirely taken up by large glass patio doors, which are kept open in good weather.

Kake visited on a Monday late lunchtime in September 2009. When I arrived a little before 2pm, there were around a dozen people sitting outside and another half-dozen inside, but I suspect they were rather busier earlier on, since most of the place settings had been used and not replaced. There was no music playing, but a good deal of clattering from the open kitchen. Water glasses were already set out on the tables, and room-temperature tap water arrived on request in a huge painted metal jug.

I started with mussels with celery and bacon (£6) photo. These were fine; the bacon was good quality, the celery was crunchy yet not undercooked, and the mussels had taken on a nice subtle hint of the flavours of the celery and bacon. It would have been perfect if only there had been a slice of decent bread served with it.

My main was grilled aubergine stew (£8) photo. This wasn't bad; the aubergines were perfectly tender, the flavour wasn't overwhelmingly tomatoey, and the dollop of yoghurt on top worked well. There was an interesting flavour in the sauce that I couldn't quite figure out.

Both courses took some time to arrive, which was a little surprising given they weren't particularly busy. Service wasn't too bad, but a little uncommunicative. As mentioned above, I would have liked to have been offered bread, and they left two used water glasses sitting out on the table next to me for the entire time I was there. The bill didn't include a service charge.

Accessibility: A very small step up to get to the interior seating. Level access to the toilets, which are fairly spacious and have baby-changing facilities but are actually in a separate building.