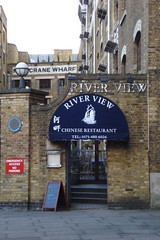 Chinese restaurant in Wapping offering Peking and Cantonese cuisine. As the name suggests, the restaurant has a river view, being situated in a converted warehouse on the north bank of the Thames, in Wapping. It's quite big - seats 200 according to its website - and has a terrace overlooking the river. It's been there since 1990, according to Port Cities.

They offer delivery within a 2 mile radius, and you can order online from Hungry House — if you want to pay by card then you need to mention this in the comments box and they'll bring a chip and pin terminal; we've confirmed that this works! There's a £2 delivery charge if your order comes to less than £30.

Kake and bob tried out the delivery option in July 2009. Steamed chicken dumplings (£4.60) turned out to be siu mai; they weren't bad, but a dipping sauce to go with them would have been nice (perhaps this was what the sachet of soy sauce was intended for). Eel satay (£8.80) was good; for an eel fan like Kake, tasty enough even to justify the price. Spicy pork Szechuan style (£6.70) had a fairly bland sauce with a very occasional bit of nicely-hot chilli. The meat was very tender; Kake would perhaps have preferred a bit more bite to it.

On previous orders in February 2008, Kake and bob tried:

Kake's verdict: It's quite expensive for takeaway, but the quality is relatively high in comparison with many takeaway-only places. I'd like to go and try eat-in some time. I'd certainly order takeaway from here again, but not if I was feeling poor.