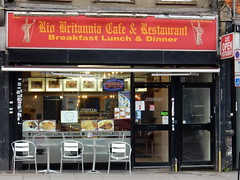 Rio's Britannia was a halal greasy spoon cafe in Norbury. It has now closed. As of January 2018 the premises are occupied by a chicken shop photo.

It seats about 40 people at fixed tables and chairs. Although the name on the frontage is "Rio Britannia", according to the menu it's actually called "Rio's Britannia".

bob visited on a Friday lunchtime (New Year's Day) in 2016. There were several customers already in and a few more came in while I was there. I got table service for my order but everyone else seemed to order at the counter, and I paid at the counter afterwards.

I had set breakfast 2 (£4.80) photo. The breakfasts are notable for containing turkey rashers instead of bacon, and I suspect the sausage was beef, which is unsurprising given the menu states that the cafe is halal. The turkey rashers made for an interesting change and tasted quite good. The egg was well cooked and the fried slice may not have been fried in my opinion. The hash browns were obviously from a frozen packet, but were cooked very well.

Accessibility: Tables and chairs are fixed to the floor. Toilets are up a flight of stairs.