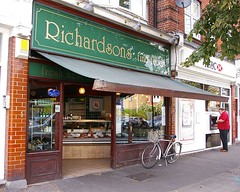 Richardson's was a butcher near South Ealing Station. According to Google Street View, it closed down by August 2014.

A rather posh looking, but friendly and good quality butcher near South Ealing Station and on bus route 65. They have a good range of fresh meat, as well as a variety of marinaded meats and a cold counter with cheese, cold cooked meat and pates.

They also have a nice range of home made sausages, and change their range of special products from time to time (during the 2004 European Cup they had a Portuguese marinade as well as Portuguese-influenced spicy sausages).

Service is friendly and they know a large proportion of their customers. However it is not the cheapest of places — you do pay for quality though.