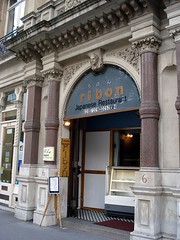 Small Japanese restaurant a hundred yards or so along from the Holborn Viaduct entrance to City Thameslink Station. The ground floor is narrow and small, with banquette seating around the edges flanked by a number of small square tables, seating maybe 20 people in total. The basement is more restaurant-like, and apparently they also do karaoke down there.

They do takeaway too, and at least at lunchtimes they have a fridge out the front with pre-packed sushi boxes to speed your lunch run.

Kake, Leon, and other Perlmongers visited for lunch at 1pm on a Thursday in June 2008. There was only a very small kerfuffle as we asked for a table for eight; the entire staff rallied round to push a number of small tables together and we were seated very quickly.

We were all provided with cups of green tea directly after sitting down, and our food came fairly quickly after ordering; though for some reason there was confusion over what DaveH had ordered, and he was kept waiting while everyone else's food had already arrived. It was fairly universally agreed that Martin and Leon, who'd ordered the daily lunch special (£10 - in this case, grilled eel served with Japanese stew, rice, miso soup, and fruit) were the winners.

Kake visited again on a Tuesday lunchtime in December 2008. When I arrived at 1:15pm, there were only a couple of seats left. I think I was the only person not wearing a suit. The daily special was ramen, which I didn't fancy, so I had the moriawase (chef's choice) sushi set instead, which was £15 including miso soup, salad, and a couple of slices of orange. The soup was fine, and the salad was decent enough too, with a subtle sesame flavour to the dressing though perhaps also a little too much sharpness. The sushi photo was a little disappointing; it mostly consisted of tuna and salmon, and the rice was a little sweeter and a little mushier than I really like. The free green tea was fine, though, and plentiful, and service was very friendly. A 10% service charge was automatically added to the bill.

Kake's verdict: I don't think I'd come back for sushi, or for lunch (unless I was passing and fancied that day's lunch special), but I wouldn't mind coming back in the evening to try some of the other dishes.

Accessibility: Toilets are in the basement, down a twisty narrow staircase.