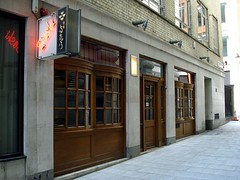 Japanese restaurant just off Piccadilly, down a side alley (Piccadilly Place) a little to the west of Le Meridean Hotel.

It's quite small, with just ten seats at the ground-floor sushi bar and another 35 or so upstairs, so it's worth booking at weekends. The ground floor also houses a takeaway counter, with pre-prepared clingwrapped polystyrene trays of sushi and sashimi. (Note that the Hungry In London review linked below suggests that as of early 2013 the sushi bar may no longer be there.) They have another takeaway-only site, Delicatessen Yoshino photo, at 59 Shaftesbury Avenue, W1D 6LF.

The interweb seems torn between labelling this place "good value" and labelling it "expensive". It's sort of both; the prices aren't cheap, but the quality is generally high. The Yoshino zen yuki set menu is perhaps the best bargain, priced at less than a tenner as of March 2010 for a main dish (e.g. fried mackerel) plus tuna carpaccio, tuna roll, seaweed salad, sesame green beans, carrot and potato salad, and pickles.

Kake visited on a Wednesday lunchtime in March 2010. When I arrived around 1:30pm, there were three customers already sitting at the sushi bar, and the upstairs sounded quite busy. I was offered a choice of where to sit, and chose the sushi bar for a bit more peace and quiet.

I was tempted by the yuki set menu but decided to splash out on the Yoshino chirashi (£19.80) photo. This wasn't what I would normally expect of chirashi (a bowl of rice with raw fish etc arranged on top), but rather a nicely presented three-tier bento box containing two starters along with a portion of rice scattered with finely-shredded nori, snow peas, and some kind of leaf vegetable, and finally a selection of seven types of sashimi on a bed of ice.

The starters were both interesting and tasty; one consisted of edamame beans tossed with shreds of lightly cooked white fish and goji berries, while the other was based on sweet-and-sour marinated sardines topped with shredded daikon and spring onion. The rice was well-seasoned, and there was obvious care and skill in the shredded vegetables on top. The sashimi was all fresh and well-cut. Green tea was £1.80, and a 12% service charge was added to the bill.

Leon also tried the chirashi set menu for lunch at the sushi bar a couple of months later, in May 2010. The fish was served in a dish — and was stuck frozen to it. That's a rookie mistake for a sushi restaurant, and inexcusable for one this expensive.

[Flick]? visited Yoshino in Autumn 2006. The menus were terrifying; I'm not sure if it's a traditional way of doing it, but rather than a list of food items they had a series of diagrams showing a plate with (say) three sections on it, then a list of items you could have in each of those three sections. The fish was wonderful, though, as was the sake (huge range). If you fancy a Japanese overdose, try Minamoto Kitchoan for pudding.

Kake's verdict: Liked it a lot. I'm going to come back and try the cheaper set menu (though Leon's experience worries me somewhat).

Accessibility: Toilets and most of the seating are on the first floor, up a flight of stairs with two bends and a handrail most of the way.