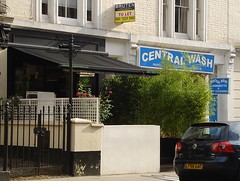 The Remedy Green Tea House was a peaceful little teahouse in between Bayswater and Notting Hill. It closed down some time in 2009.

Peaceful little teahouse in between Bayswater and Notting Hill. (May actually be called "Remedy Green Teas" - it's not really clear.)

Although it's quite small, they've made efficient use of the space. There's seating inside for about 30, on banquettes and backless cuboidal stools. It's quite pretty, with scatter cushions on the banquettes and glass jars of various tea ingredients displayed on shelves. There are also three small tables outside on a raised deck, which has been planted around with tall bushes to give some privacy from the street photo.

It's full table service; sit down and they'll bring you a menu, though if you want the full tea menu you may have to ask. They offer a large range of teas — black, red, green, yellow, and white — priced at £4–£10.50 per one-person pot, with each of the green teas available in either two or three grades (and higher quality coming at a higher price). The teas will generally stand up to at least two infusions; the first infusion is made for you, while you're left to it for subsequent ones so you can brew to your own taste.

They have a few coffees and soft drinks too, and food is available starting at £5.50 (e.g. soup of the day, noodle bowl) and going up to £14.50 (pan-grilled sweet and sour salmon). They also have a selection of cakes and pastries priced between £2 (French butter croissant) and £3.55 (luxury chocolate cake), mostly Western-style.

The focus, for both the teas and the food, is on health. The tea menu describes the health benefits of the teas as well as their flavour characteristics, and the very friendly and helpful owner will happily discuss the health effects of tea in as much detail as you wish. Even if you're not interested in this aspect, this is still a very pleasant place to drink some good quality teas.

Kake visited on a Saturday late afternoon in August 2008. There were a few other customers present, but it certainly wasn't crowded. Background music was pleasant, unobtrusive, and appropriate. I had the dragon well tea (grade 2; I should have been charged £7.50 for this, I think, but they only charged me £5.50). The first two infusions were the best; after this the aromatic aspects were exhausted and mainly bitterness remained - I was chatting to the owner at this point and when I asked for another infusion she went and got a few extra leaves to freshen up the pot a bit, which worked fairly well.

I also tried the har gao (steamed prawn dumplings in translucent wrappers, £5.50 for four), which were less good - made in a press, to start with, and then overcooked to the point where the wrappers were disintegrating and the prawns had become a little tough. Edible, but I'd not order them again.

Note that at least as of August 2008, they can't accept credit/debit cards — it's cash and cheques only.

Accessibility: Two steps up from the pavement to the decking, and a shallow sill (up then down) at the door. Quite narrow inside; would be hard to turn a wheelchair.