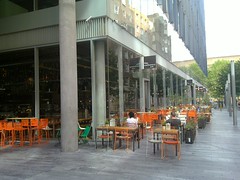 A bar in Borough.

bob visited on a Sunday afternoon in July 2010. There were a few customers outside and a couple of customers inside.

They had a range of lagers and a couple of real ales — London Pride (£3.75) and Adnam's Bitter (£3.75) — which were both okay. I also had a beef burger (£8) with extra cheese (£1), bacon (£1) and chips (£3) photo. The burger was very good: the meat tasted of something and it was still slightly pink in the middle. The onion rings were very tasty as well and made from red onion, and chips were good quality. The bun for the burger was also made from some very good bread.

As of July 2010, food is served 10am-9:45pm Mon-Fri and noon-5pm Sun. As well as their normal opening hours, they also run a party night called Soul Saturdays from 9:30pm-3am (there's an entrance charge for this).

Accessibility: Level to get in. Disabled toilet on the same level. Other toilets are up a flight of stairs.