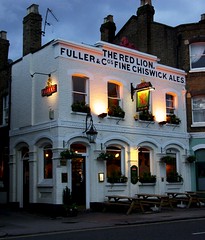 A large, popular Fuller's pub opposite Ealing Studios, and Local CAMRA Pub of the Year 2002–04. It is on the 65 bus route with two bus stops within about a minute's walk. It is about ten minutes' walk from Ealing Broadway Station.

The food is excellent, and correspondingly priced (£9-17 for a main course as of March 2008); evening dishes might include slow-roasted lamb shank with thyme and red wine, served with root vegetable mash; fish stew with halibut, prawns, mussels, and coriander; root vegetable and mixed bean stew with herb mash; or confit of duck with sauteed new potatoes, green beans, and caramelised onion gravy. During a 2007 visit, the menu comprised seven meat dishes, four fish, and two vegetarian. In the evening food is served from 7pm until 9:30pm. On an evening visit in March 2008, the food was very slow to arrive (about an hour in some cases), and a rare steak ciabatta arrived well done, and in a baguette. The quality of the food remained good, however.

There is a different lunchtime menu served from midday until 3pm. The dishes are cheaper and it is more fixed than the changing evening menu.

On Sundays they serve roast lunches until 5pm and then Pieminster pies, with mash, peas and gravy, until 9pm.

Four well-kept Fuller's ales on tap (ESB and London Pride at all times, Chiswick or Discovery and a "guest", normally from the Fuller's or Gales' range) and a longish wine list. A pint of Pride was £2.60 (March 2007). They also do takeaway beer in paper containers that they keep behind the counter. They charge less for takeaway than 'drink-in' beer.

The pub has a few tables outside at the front, as well as a back garden with mushroom heaters.

According to the Fuller's website, food is served noon-3pm and 7-9:30pm Monday to Saturday, and noon-5pm for lunch and then 6-9pm for pies on Sunday.