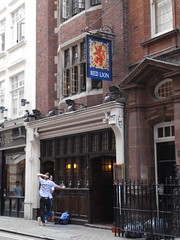 Although Sam Smith's pubs sometimes have Old Brewery Bitter on handpump (thus qualifying as real ale pubs), according to the BITE comments linked below this is not the case here. Inside, it's the usual traditional features and wood-panelling you expect at a Sam Smith's, with separate rooms on either side of the bar, as well as an upstairs room.

John tried to visit at 10:30pm on Easter Sunday in 2013, but it was closed. According to All In London it closes at 10:30pm on Sundays; according to pubs.com it's closed all day on Sundays. They don't display any opening hours on the building.

Not sure what times food is served, but it's fairly standard pub fare photo of menu as of July 2007.