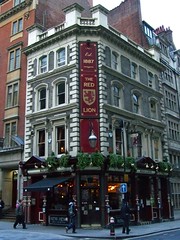 Pub located between Moorgate Station and Liverpool Street Station. Was in the 2007 Good Beer Guide but not the 2008 one.

bob and Richard visited on a Wednesday evening in September 2010. The place was half full. Real ales available were Spitfire (£3.23), Doom Bar (£3.10), and London Gold. Two other pumps had London Pride and Deuchars IPA clips, with signs indicating that they'd be coming on soon.