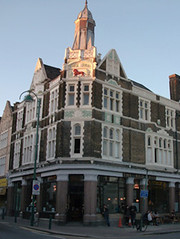 Located on Leytonstone High Road opposite the junction with Church Lane, the Red Lion has stood for over 300 years and been through many incarnations, the one prior to this being a South African bar called Zulus photo. With its acquisition by Antic and grand reopening on 15 June 2011, it has now returned to being a community local.

The pub cultivates a slightly rough aesthetic, with bare brick walls, exposed floorboards, and mismatched furniture (in the Antic house style). The space is big and open plan, and the lack of carpet or curtains means it gets quite noisy and in some seats can be hard to hear your friends, depending on how busy it is (by the time Kat got round to visiting in March 2013, some large curtains had been installed). There's a large beer garden as well out the back photo.

They have an impressive selection of drinks — ten handpumps and five keg taps reserved for guests (as well as other, more standard lager choices), usually with at least seven real ales on cask, often a real cider too, and three more ales on keg along with a cider and a lager photo of bar. CAMRA members get a 10% discount on ale. Cask selections change every day or two and as of July 2011 have recently included Redemption Urban Dusk, Thornbridge Jaipur, Purity UBU and Brodies Amarilla. On Ewan's September 2011 visit, there was Purity Mad Goose and Pure Gold, Redemption Urban Dusk and Hopspur, Truman's Summer Runner, Magic Rock Curious, St Austell Tribute, an Otley beer and a couple of others.

Otherwise, there's the traditional fare of lagers and ciders on tap (including Brew Dog 5am Saint, and Meantime beers), but these are backed up by several interesting alternatives in bottles, including organic and single varietal ciders for example. There are a good range of spirits too, usually of a high quality — Hendricks gin for example — and even three tequilas!

As of May 2012, food is served noon-3pm and 5pm-10pm Mon-Fri, and also on weekends (weekend food times unknown). They have a good simple menu including vegetarian options. Ewan tried a roast squash pie photo which was excellent and nicely-presented too. Prior to the kitchen's opening, they were offering pork pies and scotch eggs, and vegetarian versions of both ([Flash]?'s friend enjoyed the veggie scotch egg), and these may still be on offer. They also had cashew nuts in jars, flavoured with either salt and pepper or chilli. This, as well as Furrows crisps, meant that we didn't go hungry.

[Flash]?'s verdict: Although it'd only been open a month when I visited, it was already establishing itself as the sort of place where you'll run into someone you know. Altogether, it's got off to a promising start, and is already attracting a good crowd through the doors. With the addition of noise-muffling drapes around the window it would be an even better venue.

Ewan's verdict: Despite not living in Leytonstone, this is a fantastic pub which I'm always happy to make a journey to visit. The constant changing ales and good keg lager and bottled beer offerings make it worth a visit, quite aside from the pleasant and friendly atmosphere.