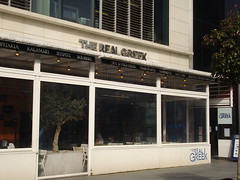 Situated outside the main shopping centre on the Chestnut Plaza (very close to Wahaca and The Cow, a large section of the seating is outdoors. However, like most of the other Chestnut Plaza restaurants, in winter this section is enclosed in weatherproof canvas/polythene (i.e. not suitable for smokers). The interior seating mostly comprises standard small tables and chairs, with a larger table/benches and three raised booths near the back.

Kat and two friends visited on a Tuesday evening in October 2014. We hadn't booked and it was fairly busy, but we were shown to a table straight away. Music was playing quietly, just loud enough for us to hear that Zorba's Dance was played at least twice. The menu suggested 3 or 4 meze dishes per person; 3 each plus a portion of chips was about the right amount for us. The highlights were Gigandes Plak (£4.25), a hearty bean stew with a lovely tomato sauce, the halloumi and vegetable skewers (£5.25) and the prawns with feta (£6.75). Tap water was provided on request. With drinks and a pudding each, the bill came to £25/head excluding tip.

Kat's verdict: the food was pretty good for the price, though the service could have been a bit more attentive. A reasonable option among the many in Westfield.

Accessibility: Like much of Westfield Stratford City, the restaurant is step-free (aside from the raised seating booths). There is an accessible toilet that doubles as a baby change unit, and the cubicle doors in the ladies' both open outwards.