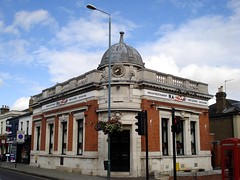 Razza was an Indian restaurant and bar in Woodford Green. It has now closed. According to Google Street View, by October 2014 the premises were occupied by a meze restaurant called Marina.

It's quite large inside, being situated in a converted bank, and still retains a number of the original architectural features including high ceilings and double-length windows. The decor is clean and smart, with light colours accented with reds and purples.

Kake visited on a Tuesday evening in September 2008. It was quite early when I arrived, so I wasn't surprised to see that I was the only customer, though another party did turn up shortly before I left, and several people came in to collect takeaway orders while I was there.

I started with lamb chops (£3.90), which were nice enough, although they were a little drier and tougher than I'd have preferred, and were lacking in the crispy fat that makes good tandoori lamb chops so great. However, the flavour was fine and I liked the garnish of fried onions.

Unfortunately my main course was less good. Seeing that the menu placed some emphasis on fish dishes, with separate sections for cod, salmon, tuna, sea bass, and shellfish, I decided to try the Persian tuna fish (£9). Although the sauce had a decent flavour, both the flavour and texture of the tuna itself betrayed that it was some days past its best.

To their credit, when I pointed out the problem the manager immediately offered to bring me something else instead, and when I declined, the offending dish was removed from the bill without me even having to ask. But, really, that dish should never have left the kitchen.

Kake's verdict: I might pop in for a drink if I was passing, since it's quite a nice space, but I'd take some persuading to give the food another go.