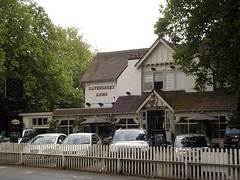 The Ravensbury was a pub alongside the common in Mitcham. It has now closed. As of early 2017 the building is occupied by an Indian and Indian-Chinese restaurant and bar, still under the name of the Ravensbury.

Pub alongside the common in Mitcham.

Note: According to the Oct/Nov 2015 London Drinker magazine, the Ravensbury was taken over in May 2015 by the owners of the Grange at Beddington Park, but closed in July 2015, and its future is uncertain.

Note also: it was previously part of the Butcher and Barrel pub chain. According to the June/July 2013 issue of London Drinker magazine, Butcher and Barrel went into administration, but their pubs continued in operation under the administrators. According to the December 2013/January 2014 edition of the same magazine, the Ravensbury is now in the hands of the Funky Brownz chain. We don't know if the name is going to change, and we don't know what else will change.

The comments below pre-date all this, and hence may be out of date.

Entry is into the main bar area, which is airy and spacious. To the right is a separate restaurant section, and beyond that is a large beer garden.

bob, Kake, and Richardc visited on a pleasant Saturday afternoon in September 2012. There was a wedding reception going on in the restaurant section and some of the beer garden, but there were still plenty of tables in the main bar and in the rest of the garden.

They had London Pride, Doom Bar, Summer Lightning, Cottage Atlantic (£3.10/pint), and Courage Directors on when we arrived. The Summer Lighting turned out to be off when we tried to order it, though. The member of bar staff thought it might be off but let bob try it to make sure; when he confirmed it had gone off, the pump clip was turned round immediately. The Cottage Atlantic was a very nice pint and certainly kept well. Stowford Press cider was £3.80/pint.

According to an email from the management, as of September 2012 food is served 8am-10pm (breakfast 8am-noon, regular menu thereafter).

On our visit we shared a "butcher's plate" sharing platter (£12) photo, which consisted of BBQ pork spare ribs, chicken skewers, sausages, and beef kofte served with piccalilli and a salad of (undressed) rocket. Kake felt that the chicken skewers and beef kofte were a bit dry. The ribs weren't marinaded in the BBQ sauce, just very lightly drizzled in it after cooking, but since the sauce was overly sweet and lacking in flavour it wasn't particularly missed. The sausage was pretty good.

According to their website as of September 2012, there's a pub quiz every Wednesday from 8pm.

Accesibility: A ramp to get in. Step-free to the bar, toilets, and most of the seating once you're in, though a few of the tables are on a dais. Unsure whether there are steps to access the beer garden from inside, but there's definitely level access if you go back out the front door and enter the beer garden from there. There is a RADAR locked accessible toilet. The pub has a car park at the front.