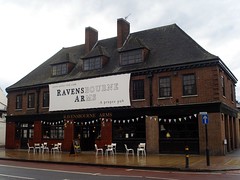 The Ravensbourne Arms was an Antic pub at the Ladywell end of Lewisham. It closed down at the end of October 2016.

Antic pub at the Ladywell end of Lewisham. Prior to the Antic takeover/makeover in 2011, it was known as the Coach and Horses.

It's quite large inside, with the main area in front of the bar broken up by pillars and another area to the side of the bar offering sofas, banquette seating, and Antic's trademark quirky bits of decor photo. The floor is hardwood, and assorted lamps hang from the ceiling by the bar. There's a beer garden in the rear, mostly concrete with plenty of tables.

Kake and bob visited on a Thursday evening in June 2011. All five handpumps were on, offering Adnams Lighthouse (£1.40/half) and Regatta, Sharp's Doom Bar, Greene King London Glory (£1.55/half), and Purity Pure Gold (£1.60/half). A completely different set of ales were on during Ewan's visit in March 2012, suggesting they change them regularly. An Adnam's Mild (£1.60/half) was pleasant, while they also offered a 2.8% ale for £2.30/pint.

There were very few customers in during our June 2011 visit, from when Kake arrived shortly after the 4pm opening time to when we left a little before 8pm. Service was friendly though. Music was playing, various indie hits from the '90s and '00s (Manic Street Preachers, Portishead, The Killers, Eels, REM). On Ewan's Sunday afternoon visit in March 2012, there were more customers in evidence and the pub presented a pleasant relaxed environment, with only faint background music.

According to Brockley Central, as of October 2011 food is available noon-3pm and 5pm-10pm Mon-Fri, noon-3pm and 5pm-9pm Sat, and noon-6pm Sun. The food menu is decent, with a good range of options. On a September 2012 visit, Ewan tried the fish and chips (billed as coley, the type of fish, £9) photo, which was good and crispy, served with tartare sauce.

Accessibility: A small step to get in. Level to the ladies' once you're in (not sure about the gents'). One of the cubicles in the ladies' is extra-wide. Most of the seating is on the same level, but some is up a step or two.