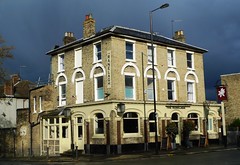 Rather nice pub just along the road from Bounds Green Station.

It's a Castle (Mitchells & Butlers) pub, and shares similarities with a number of other examples of the breed, such as the Crown Tavern in Clerkenwell — real ciders and continental lagers in addition to a couple of real ales, plus a menu which is uniform between the pubs but offers food which is more interesting than average (though the prices also tend to be a little higher than average).

The interior of the Ranelagh manages to be both cosy and modern at the same time, with variously-shaped sofas and things as well as normal chairs. There's a covered patio area attached to the pub, and steps lead down from the patio to a fairly large beer garden photo with grass and lots of plants and those bench/table combination things, painted in different colours. Flowerpots on the tables are intended as ashtrays to stop people putting their cigarettes out on the grass, but the scattering of butts underneath each table suggests this isn't entirely successful.

Weston's Vintage was £3/pint on Kake's first visit in April 2007, and was still available on a second visit in September 2008. On this second visit, the other three of their four handpumps featured Batemans Combined Harvest (£3.05/pint), London Pride, and Marston Pedigree. Other beers on tap included Sierra Nevada, Staropramen, and Pilsner Urquell.

As of September 2008, the food hours are noon-10pm Monday-Sunday. The menu photo is the same as the one at the Crown, but with prices up to a pound cheaper. In addition to this, a sign spotted in September 2008 also advertised breakfast between 10am and noon on Saturdays and Sundays, from £1.50 for a pastry up to £5 for the full English or cooked vegetarian breakfast. The veggie breakfast components were listed on a blackboard: veggie sausage, bubble, fried egg, beans, tomato, and mushroom.

In April 2007, Kake tried the steak pie; it was maybe about a quid overpriced for somewhere this far out of central London, at £8.90, and the pastry was a little tough in places, but the steak pieces were good — no fatty bits — and I also liked the mushrooms (portobello? not button, anyway) and baby onions. The new potatoes and fine green beans that came with it were just right, and the wholegrain mustard gravy over the whole was a lovely touch (and one of the reasons why I didn't feel ripped off by the price — why don't more pubs pay attention to detail like this?).

Kake visited again in September 2008, and this time had the fishfinger sandwich (£4.60); it was served in a bap with lime mayo, and was perfectly fine.

A sign spotted in September 2008 mentioned that children are welcome, but must leave the premises by 7pm. Another sign, seen on the same visit, advertised live music every Tuesday from 8:30pm.

Accessibility: There's a step up to get in, but there's a doorbell at wheelchair height with the wheelchair symbol and a sign inviting you to ring for assistance. Once you're in, there's step-free access to the bar, interior seating area, and toilets. Not sure if there's an accessible toilet.