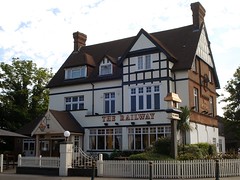 The interior is typical of Ember Inns, with bland artworks on the walls, exposed brickwork here and there, colour-coordinated upholstery, and a mix of carpeting and tiled areas. It's quite large, but the space is broken up into several different areas, so it doesn't feel cavernous at all. There's a fair bit of picnic bench seating outside too.

Kake visited on a Tuesday lunchtime in September 2012. There were five real ales on, all priced at £2.95/pint: Harvey's Sussex Best, Young's Bitter, London Pride, Fuller's Red Fox, and Butcombe Adam Henson's Rare Breed. A pint of lime and soda was a pleasingly cheap 60p.

There were quite a few customers in already when I arrived around noon, some of them with babies. More people continued to arrive while I was there, presumably in for lunch. Music was playing; quite bland, not too loud.

Food is served all day from a standard Ember Inns menu.

A sign seen in September 2012 advertised pub quizzes on Tuesdays and Sundays from 8:30pm.

Accessibility: A ramp to get in. Step-free to the bar, most (possibly all) of the interior seating, the outside picnic bench seating, and the RADAR-locked accessible toilet. The other toilets are up a wide flight of stairs with a u-bend and a sturdy handrail on both sides (though the staircase is probably too wide to let you hold both handrails at once). The pub has its own car park.