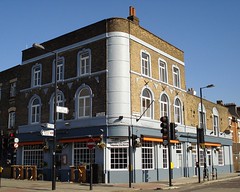 Entry is into the bar area, with padded banquettes as well as normal chairs and tables. There's another room further back, lighter and airier photo, and finally a small partially-covered beer garden.

Kake visited on a Friday lunchtime in June 2013. There were several other customers in, mostly women, and among them they had at least one baby. Music was playing, not too loud.

Four real ales were on, all from London breweries: Sambrooks Wandle, Sambrooks Junction, Clarence & Frederick's Golden Ale, and ELB Nightwatchman. A pint of lime and soda was 80p.

According to their website as of June 2013, food is served noon-3pm and 5pm-10pm Mon-Fri; noon-10pm Sat; and noon-8pm Sun; see photo of menu as of the same month. Kake tried the chargrilled halloumi, artichoke, courgette & aubergine salad (£8.50) photo. The mix of cooked and raw vegetables was just right; perfectly grilled aubergines and courgettes set off by juicy cherry tomatoes and crisp raw carrots, celery, and cucumber. The artichoke on top had a particularly good scent of the grill, and the dressing was interesting without being overwhelming.

Free wifi is available; the key is written on a board on the bar. According to their website as of June 2013, the back room can be hired for free. They also host a monthly farmers market. According to a sign seen in June 2013 photo, quiz night is Tuesday from 8pm.

Child-friendliness: Signs behind the bar state that children are welcome until 8pm, and "kids drinks" are available for 80p. There's a door marked "baby change" though we haven't examined the facilities behind it.

Accessibility: Small step to get in. There's a ramp to the beer garden, though it's not entirely smooth, with small steps at either end. There's an accessible toilet at the same level as the main pub area.

Kake's verdict: I was very impressed by the food, and am keen to go back and try more of the menu.