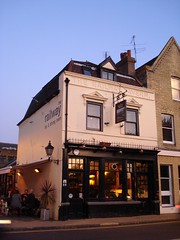 The Railway was a Hall & Woodhouse pub in Mortlake, just up the road from Mortlake Station. As of August 2011, Richmond and Hounslow CAMRA reports that it has closed.

A Hall & Woodhouse pub in Mortlake, just up the road from Mortlake Station.

It's on the upmarket side, describing itself as a "pub and dining room". Inside, there are polished floorboards, worn rugs, steps everywhere, and a low, squashy black leather sofa at back seemingly placed specifically to be in the way of people trying to get to the toilets. There's some outside seating too, some of it covered.

Kake visited early on a Friday evening in October 2008. Beers available were Fursty Ferret (£1.55/half), Badger, and Tanglefoot. There were quite a few people in, unsurprising on a Friday night. There were a few free tables available when I arrived, but they filled up during my visit. Piped music was playing, but not loud enough to get in the way of conversation.

The ladies' toilets were in a bit of a state - one cubicle out of order, one with a nonfunctional lock (and no seat), and the third with liquid leaking out onto the floor (and no seat). The hand drier wasn't working either.

Accessibility: As mentioned above, steps everywhere.