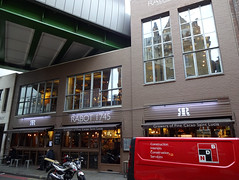 It's owned by Hotel Chocolat, who source their cacao from their own plantation. At Rabot 1745, this features as a subtle savoury seasoning in all main dishes (and cocktails) as well as the chocolate-heavy puddings.

Bec and Steve visited in December 2015. We were seated in the terrace area with outside heaters overlooking Borough Market. The server was very enthusiastic, demonstrating how to crush and taste the cacao nibs which were set on the table before we arrived. Dining was informal and relaxed, with attentive but not overbearing service.

Steve had a chopped rump steak burger with aged cheddar, cacao beer braised onions, potato chips, and creole chutney (£15) — good and fun for the novelty but nothing spectacular. Bec had the ground provision (a West Indian term for vegetables grown in the ground — this was potato and carrot) coconut run-down with cacao rice and peas, sweet potato and spinach nib dhal, and spiced tomato relish (£15) which was spicy without heat and very good although a fairly small portion.

The real star of the meal was, unsurprisingly, Bec's molten chocolate lava pudding with nib infused ice cream (£8). Steve enjoyed his cacao-honey roast fig with cacao nib ice-cream, Brittany shortbread and conched chocolate sticks (£8) but after sampling a taste, would have chosen the lava pudding over it.

Bec's verdict: A pleasant dining experience with excellent service and worth a visit for the pudding, but the novelty of the barely-tasteable cacao wore off quickly.