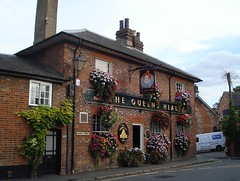 Inside, it's divided into three separate seating areas — a public bar (with dartboard), a dining area, and another slightly corridor-like space along the side of the bar — and there's a small beer garden out the back too. There's also a separate building with "Restaurant" written on the door, but we don't know when/whether this is ever opened. The decor is quite nice, with a polished dark wood floor covered with artfully-faded rugs, and old framed photos on the walls.

Kake visited on a Thursday afternoon in October 2009. They had three Fuller's beers on — London Pride, Chiswick (£1.35/half), and ESB — plus a guest, Brakspear Bitter. There were a few people in, but it wasn't full by any means. There was no music playing, but they did have a TV showing Sky Sports News with the sound on quietly.

Thai food menu photo 1, menu photo 2 is served noon-9:30pm Mon-Sun, according to the Fuller's website (and the bar staff) as of October 2009. The menu I saw only had main courses on it, but they also had some starters written on a blackboard by the bar. I tried the sesame prawn toast (£4). It was quite greasy — perhaps they didn't wait for the oil to come back up to heat (it was late afternoon, definitely an off-peak time for food). The prawns were also pretty much undetectable. The chilli dip was fine, though, a nice hint of chilli heat and not the usual slop from a bottle.

Accessibility: No step to get in, and there's level access to the ladies (the second ladies' doubles as an accessible toilet) once you're in. Level throughout the interior but two steps down to the beer garden (there might be level access to this from the street, though).