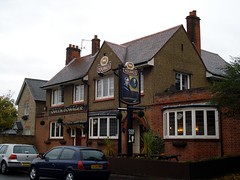 Now closed; was a Young's pub in Teddington.

As of October 2011, Teddington Town reported that the premises have been sold to a property developer. As of December 2011, Richmond & Hounslow CAMRA news pointed to a planning application to demolish the building and replace it with housing; however, they also report that as of February 2012 this application has been refused PDF. Nevertheless, as of March 2013, the demolition is going ahead.

Modern-ish decor inside, including an area to the right of the bar made up of high-backed booth seating.

Kake visited on a Saturday lunchtime in November 2008. There were a few other customers in, but plenty of seats left. The flatscreen was showing horseracing with the sound off, and an Abba CD was playing.

Although they have five or six handpumps, the only real ales available were Young's ordinary (£3/pint) and Special. Service was very friendly.

According to the 2007 Good Beer Guide, food is served noon-3pm and 6-9:30pm Monday to Saturday, and noon-4:30pm Sunday. This may now be out of date - but they were certainly serving food at 2pm on the Saturday of my visit. I had a tuna mayonnaise panini (£4.50 including chips) photo. It was a fairly no-frills rendition, but it was good, with just the right balance of mayo to tuna. The chips were unexciting, but were competently fried.

Interestingly, they also offer sushi, via QD Sushi. I didn't try it, but the menu looked interesting.

Accessibility: Shallow ramp to get in; can't remember if there was a step for the toilets.