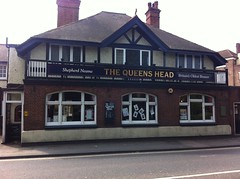 The Queen's Head was a Shepherd Neame pub in Mitcham. According to the April/May 2016 London Drinker magazine, it closed down in March 2016.

It's quite a traditional pub, with one point of interest being the Metallica pinball table photo. It also has a pool table and a small beer garden.

bob visited on a Sunday afternoon in May 2014. There were only three other customers when I arrived a little before 1pm, though three others turned up during the half hour I was there.

Two of the four handpumps were on, offering Whitstable Bay Pale Ale (£3.40/pint) and Spitfire.

As of May 2014, Sunday roasts are usually (but not always) available; it's best to check on the day.

Accessibility: Steps at both entrances, though one step is smaller than the other. Small step to beer garden.