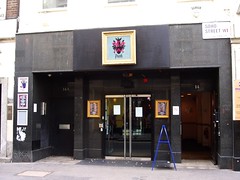 This bar just off Oxford Street was demolished around 2013 as part of the Crossrail transport project.

A stylish bar and nightclub for the young people, in Soho, just off Oxford Street. Formerly called Everything Must Go, and before that Pop.

The bar is downstairs from Soho Street, in a glamorously tricked-out basement. The place seems fairly welcoming for this kind of club, and the door staff seemed to be quite friendly (and were happy for me to pop out for some cash), but on a Monday evening, there to see a friend's band, it didn't seem too threateningly obnoxious.

There's a range of cocktails available (listed on the website, around £8.50-9.50), although drinks are at the expected high prices. A brandy and soda was £4.50, but it was a generous measure (at least 35ml) of a decent quality brandy, and free-poured by the staff, which makes a change.

Live music is hosted there occasionally.