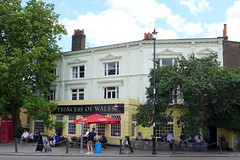 The interior is dominated by stripped-wood floors and wooden tables, cosy little booths stretching back deep into the interior, a little conservatory down the back and a beer garden outside, as well as tables along the front windows with a good view over the Heath. Games such as Pictionary and Scrabble are available for use. There are also tables outside the front of the pub.

The bar has around four handpulls for ale, with regularly changing guest ales; in May 2011, the options were Purity Ubu (£1.80/half), Cropton Royal Union, and Shepherd Neame Spitfire. They also have a good range of draught lagers and ciders, as befits the Metro Professionals sub-brand, which is reliable for drinks range. In winter, specials such as mulled wine and warm apple and Pimm's are also available.

According to their website as of September 2009, food is served noon-10pm Mon-Sat and noon-9pm Sun. The food is from a fairly standard M&B template photo of menu as of May 2011.

On Ewan's December 2009 visit, the lamb burger with Moroccan spices (£7.75) photo was tasty, and served with chunky chips, but just a little too big to fit into one's mouth easily. On Kake's May 2011 visit, the smoked salmon with beetroot creme fraiche and rye bread (£5.75) photo was OK, but the salmon was quite chewy in places, and the bread was granary rather than the advertised rye.

Kake observed a customer with a dog in May 2011, so it appears to be dog-friendly.

Accessibility: Stepfree to get in at least one of the entrances, though the doors are heavy and the doorway fairly narrow. Also stepfree through to the ladies'. Steps to the back beer garden, though there may be another way through that I didn't see.