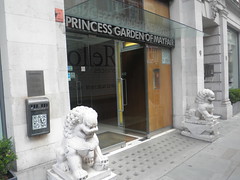 Entry is into a bar area which the Time Out review linked below aptly describes as being reminiscent of an airport lounge (albeit a first-class one). From here, along a short corridor lined with Chinese art, is the dining area. This comprises a light, open, if somewhat boxy room, situated as it is on the corner of a block, with large tinted glass windows separating it from the street. Tables are widely-spaced and clothed in white linen photo.

Kake, Sung, Les, Limster, and Sharmila visited on a Wednesday evening in June 2011. We'd booked, which was probably a good idea.

A whole steamed seabass with ginger and spring onions photo was competently deboned and steamed perfectly, though Les noted that it tasted more farmed than wild (it was described as wild on the menu). E-fu noodles with crab meat photo had a perfect texture and a generous quantity of crab meat.

The only real disappointment of the meal was the pork casserole with preserved vegetables (梅菜扣肉煲) photo; the meat here was insufficiently tender. Quick fried egg white with chives (蛋白炒韭菜/dàn bái chǎo jiǔ cài) photo was also not as good as the rest of the dishes, being a little greasier than optimal.

Overall, though, the quality of the food was rather good; we all agreed that we'd happily return (and in fact some of us have since, while others of us had already eaten there before). Kake, who isn't usually a noodle fan, would come back just for the e-fu noodles.

Accessibility: No step to get in, and step-free through to the dining area, but the toilets are down a flight of stairs with a couple of bends and a handrail most of the way.