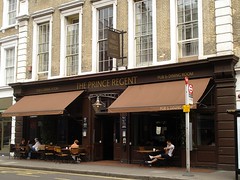 The Prince Regent was a gastropub on Gloucester Road in South Kensington, part of the Food & Fuel group. It closed in early 2010. As of mid-2010, the premises remain in the hands of Food & Fuel, but are occupied by Coco Momo, a "café bar brasserie".

The information below is retained for people who want to know what it was like as the Prince Regent.

Gastropub on Gloucester Road in South Kensington, part of the Food And Fuel group.

The front part is a large open area with a high white ceiling, teal-painted walls, and a dark hardwood floor. Most of the seating is at decent-sized square or round wooden tables with upright wooden chairs, but there's also a set of four small burgundy armchairs near the door and there might be a sofa over the other side too. Further back, opposite the open kitchen that stretches back at right angles to the bar, are a couple of booths with a huge painting of the Prince Regent himself mounted above them. Beyond these is a dining area with banquettes and tables set with wine glasses and cutlery. There's some seating out the front on the pavement too.

Kake, bob, Richard, and Billy visited on a Thursday afternoon/evening in July 2009. The two handpumps on the bar had Adnams Explorer (£3.15/pint) and Wells Eagle IPA (£3.10/pint). Lime and soda was 50p/pint. Music was playing, a bit too doof-doof and a little too loud for Kake's preference. Service was friendly enough.

Food is served at least at lunchtimes and evenings, and possibly all day. Photo of menu as of July 2009. We tried various dishes and were generally quite pleased, though there were a few misses.

Kake's haddock goujons with tartare sauce (£4) were freshly-prepared, with a crisp, non-oily coating, and the fish wasn't overcooked; the tartare sauce was also clearly made in-house, though it was a little bland, tasting mostly of its mayonnaise base. The presentation also left a little to be desired, with the much-needed lemon wedge propped up in the tartare sauce, making it rather messy to squeeze.

Garlic, aubergine, and spinach soup (£4.50) photo can be forgiven for not tasting of aubergine, given the general blandness of the vegetable, but it also tasted of neither garlic nor spinach. All four of us tried it, and the only flavour anyone could pick out was celery. Very disappointing.

Kake's Cornish chilli crab salad with lemon dressing (£6) photo was better, with plenty of crabmeat, a zingy dressing, and a good balance of ingredients; no actual chilli was detectable, but it didn't really need it.

bob's Aberdeen Angus burger with big chips (£9) photo, came rare as requested, though he would like to point out that there were only twelve chips.

Richard was very pleased with his ribeye steak on the bone (£16.50 including hand-cut chips) photo.

Billy felt his roast duck breast (£13 including vegetables) was all right, though it was quite small for the price, and while one of the pieces of duck was perfect, the other was overcooked.

Accessibility: Can't remember whether there was a step to get in. Toilets are in the basement, down a flight of stairs with a bend in the middle.