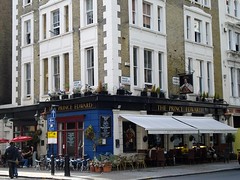 Hall and Woodhouse pub in Bayswater. The interior is fairly traditional photo.

Kake and Richard visited on a Monday evening in July 2009. There were three Hall and Woodhouse ales on handpump, including the seasonal Lemony Cricket. Stowford Press cider was £3.30/pint. The lighting was quite dim, though it would have been possible to read a book. Music was playing, a fairly varied selection.

According to the 2007 Good Beer Guide, lunch is served noon-3pm, and evening meals 5:30pm-10pm (until 9pm on Sunday). We're not sure whether this is still the case, but on our July 2009 visit the menus photo were put out on the tables around 6:15pm.

We tried the sharing platter (£12) photo, which included chicken skewers, garlic bread, battered scampi, a single samosa, sausages, vegetable spring rolls, onion rings, and salad. The chicken skewers were overcooked and dry, and the spring rolls mainly tasted of tinned beansprouts. The onion rings were the type made from chopped onion in batter, though they were competent enough for what they were. The salad was dressed with an entirely flavourless oil-based dressing. The scampi were quite good though.

Accessibility: Step-free to get in (at the side entrance, at least), and step-free access to the bar, seating area, and toilets.