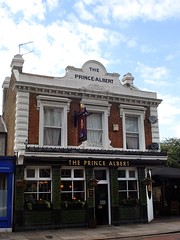 The front door is marked "public bar" while the side door is marked "saloon entrance", but there's no separation between these areas once you're inside. A restaurant area towards the back is the domain of the Thai food franchise.

There's a covered patio next to the side entrance, separated from the road by a small fence; a large flatscreen attached to the side wall of the pub ensures that even smokers won't miss out when sport is being shown. There's also a half-paved half-grass beer garden photo out the back through the restaurant.

Kake visited on a Thursday afternoon in May 2011. Four Fuller's ales were on: Chiswick, Discovery (£1.70/half), ESB, and London Pride. There were quite a lot of people in for 4:30pm on a weekday, though plenty of space left to sit.

Bob and family made an earlier visit on a Sunday in November 2008. The London Pride (£2.85/pint) was drinkable. It was a match day, so we had to sit outside for our food since all the normal tables were booked. They were serving their full Thai menu but a very limited English one (hog roast, burger and chips, and hotdog and chips). The English menu is normally larger. I had the pad ped with beef (£6.25) photo and some sticky rice (£2.50). My brother had the kaeng penang which tasted very good.

A sign seen in May 2011 stated that children are permitted on the premises including the garden and patio until 9pm only, but that "this does not apply to children dining in the restaurant". Another sign seen on the same visit advertised live music every Saturday from 9pm to 11pm.