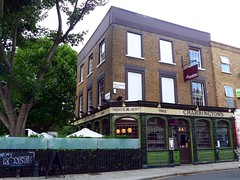 It's an ex-Charrington pub; the windows still bear Charrington's branding, and the exterior tiling is still in place. A small patio-style beer garden sits to one side, shielded from the road by a neat hedge. Inside, the exposed floorboards, mismatched wooden chairs, and church pew seating betray its reincarnation as a gastropub, an impression borne out by the food on offer photo of lunch menu, photo of regular menu.

The room is dominated by a large horseshoe bar. As well as fonts for lagers and such, this has four handpumps which on Kake's September 2010 visit had Black Sheep Bitter (£3.30/pint), Young's Special, Young's London Gold, and Redemption Pale Ale, with the latter specified on a blackboard as being their guest "LocAle". A board on the wall advertised two draft real ciders, including Addlestone's cloudy (£3.70/pint).

When Kake visited on a Tuesday afternoon in September 2010, there were a fair few people in having lunch, though there were plenty of free tables. Music was playing; a mixture of soul, soft rock, and things like the Beatles. Staff were efficient, uniformed, and not unfriendly.

According to the 2011 Good Beer Guide, there's a restaurant on the first floor, quiz night is Sunday from 8pm, and children and dogs are welcome. As of September 2010, food is served lunchtimes and evenings, though not all day (at least on weekdays; on a Tuesday, the menus were collected up from the tables just before 3pm).

Accessibility: A small step up to get in. The gents' toilet is on the ground floor, and doubles as an accessible one (not sure if there are steps to get into it). The ladies' is in the basement, down a flight of stairs with a bend in the middle and no handrail most of the way.