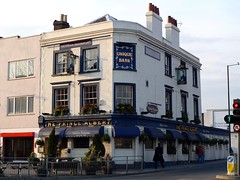 Shepherd Neame pub in Bexleyheath, with interesting interior decor consisting of a superabundance of nautical brassware. There's a dartboard beside the bar too.

They do food in the pub part, at least on Sundays photo of the Sunday roast menu, but there's also a separate "Victorian restaurant" upstairs. Downstairs, the pub area roughly divides into two areas (the old saloon and public bars), with the bar running the length of the space.

Kake, Ewan, bob, and Matthew visited on a Sunday afternoon in April 2009. There were quite a few people in. The flatscreens were showing Sky sports with the sound on very quietly, almost completely masked by the radio playing through the speakers.

There are six handpulls, with Spitfire, Kent's Best and Early Bird (£3.15/pint) on the handpulls as of April 2009.

An open fireplace was in evidence, but was not lit, so it's not clear if it gets used during winter.

Accessibility: Step-free access to the bar, seating area, and toilets.