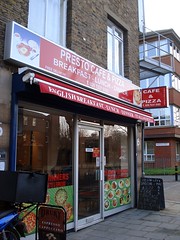 Presto Cafe was a greasy spoon cafe on Tower Bridge Road in Bermondsey, close to the junction with the Bricklayers Arms roundabout. It has now closed.

As of June 2011 the premises were occupied by another cafe serving both Thai food and greasy spoon food, but this also closed in its turn. As of March 2014 the occupant is Costa Azul photo, a Bolivian and Ecuadorian cafe (which is planned to move to Elephant and Castle at some point).

The information below is retained for people who want to know what it used to be like as Presto Cafe.

A greasy spoon cafe on Tower Bridge Road in Bermondsey, close to the junction with the Bricklayers Arms roundabout. It seats about 20 people.

bob visited on a Saturday morning in June 2010. There were a couple of other customers in, and a TV showing Saturday Kitchen with the sound on fairly loudly. I had set breakfast number 6 (£4) with an extra egg (80p) photo. The eggs were slightly overcooked and lacking yolk. The bacon was very good, the black pudding was fine, and the mushrooms were okay. The set breakfast came with a generously-sized cup of tea with the teabag left in, and some decent toast from a white bloomer.

secretlondon made an earlier visit on a Friday in November 2008. Music was playing — Capital Radio. I had a breakfast for £4.50 photo. The bacon was thicker than normal, and there was a long sausage. They also do lamb chops, grills, sandwiches etc.