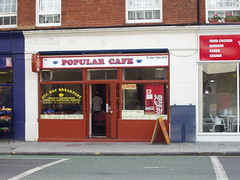 Greasy spoon on Lever Street, does a decent fry-up. Other dishes offered too; the Shanghai rice and the spaghetti Bolognese are both quite tasty. The staff are friendly, and there are plenty of papers to read, but the seating can be slightly cramped at times.