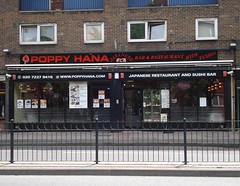 A self-described "Japanese restaurant with fusion", Poppy Hana opened on Jamaica Road in Bermondsey around September 2006, replacing the previous (English) version of the business. They also stock a small selection of Japanese groceries. They offer a takeaway service, too, and they deliver within 2 miles' radius for orders over £15. You can order online from Hungry House.

Kake has had takeaway from here many times, most recently in June 2011. The prices are reasonable, and the range is good, including things like natto rolls and devilled "fusion" items.

The quality is generally acceptable, but can be very variable; for example, while sometimes the yellowtail sashimi is thickly sliced and fresh-tasting, it has more than once come as thin slices that were definitely on the turn (I'm not generally timid when it comes to such matters, but the yellowtail in my May 2011 order went in the bin as I didn't feel it was safe to eat). Similarly, the prawns in my June 2011 order of spicy seafood fusion soup (£4) tasted oddly of bleach.

Among the starters, the takoyaki (battered octopus balls, £3.25) is notable for the bonito flakes on top; when they bring it to your table the dried bonito flutters around in the heat, almost looking like something alive! See this video (with sound, from elsewhere). Sadly, this feature doesn't survive the takeaway process. Kake has tried the yakitori (£3.25 for four skewers) several times over the years, and as of late 2008 has pretty much decided to give up on it, despite a love for this dish in general, as the quality has varied from terrible to not-very-good, and is usually on the lower end of that.

Long-term Poppy Hana fans should note that the menu expanded again in late 2008. Newly-sampled dishes in our November 2008 order were hiyayakko (cold silky tofu with spring onion and grated ginger, £3) and tebashio chicken (grilled and salted chicken wings, £3.25). The hiyayakko wasn't bad at all; although the tofu had that slightly greyish colour which suggests it came out of an aseptic packet, it didn't have the off flavour often associated with such packaging. The grilled chicken was fine. They also now do "devilled lamb chops" which Kake tried in December 2008; they were fine too, though not really far above average.

The nigiri menu includes salmon roe, flying fish roe, amaebi, octopus, and scallop; as of November 2008, prices range from £2.50 for two tamago nigiri through £3 for two tuna nigiri up to £4 for two sea urchin nigiri. Quality and style has varied; in our November 2008 order, the rice was a bit too sweet and a bit too mushy for Kake's taste, but the ratio of fish to rice was good, as was the overall size of the nigiri (last time they were enormous but they've fixed that now).

Sean says: The bento boxes are pretty good — I love the beef one, there's generally tempura prawns, some sushi, some fruit, rice, and meat or veg. Marna likes the silken tofu.

We've also eaten in a few times. The service has occasionally been patchy, but any mistakes have always been promptly apologised for. It's difficult to say whether this place is worth a special trip; while there are certainly places that do better sushi (generally at higher prices), there aren't many convenient to Bermondsey that offer this range and quality at this price (although there's always Feng Sushi at London Bridge, if that's your thing; different atmosphere, though).